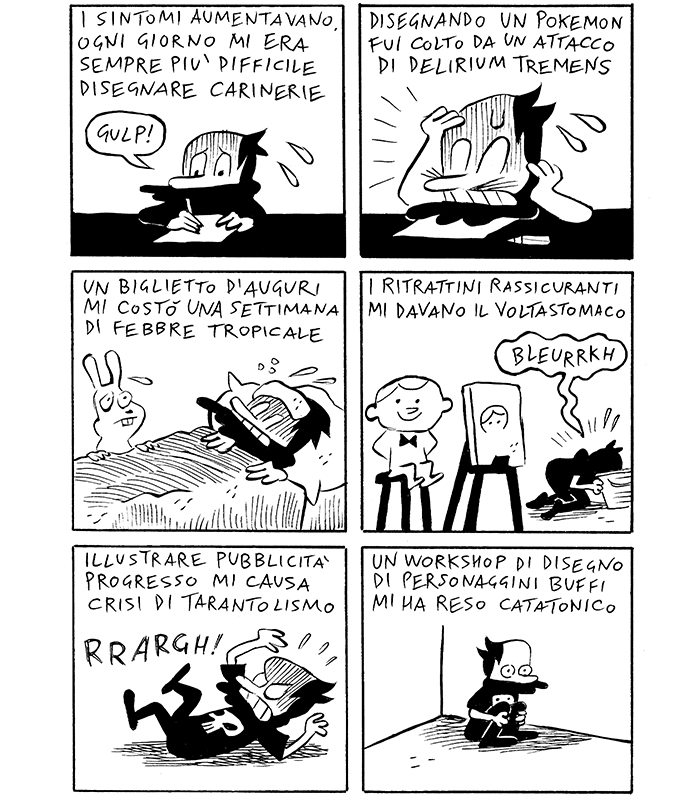 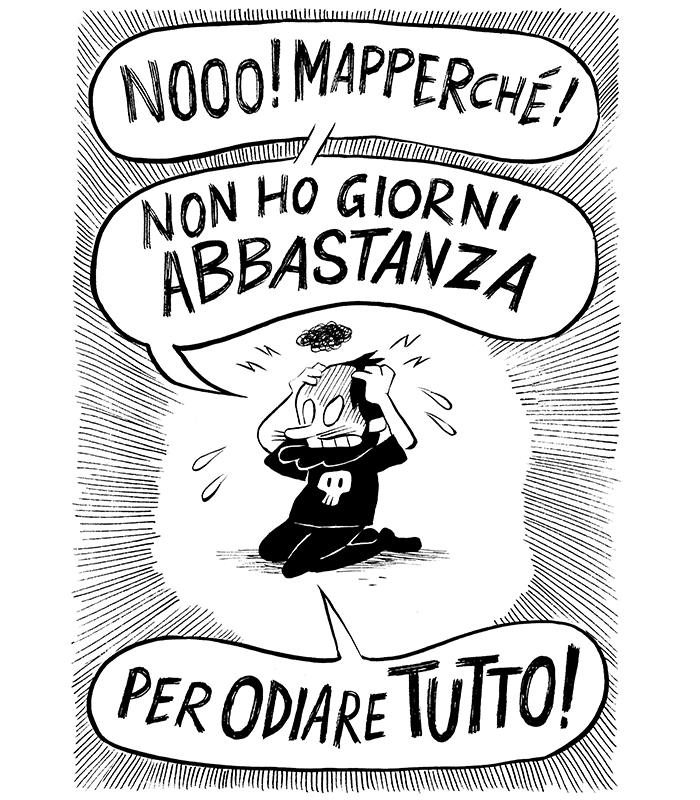 Andrea Paggiaro was born in Pisa in 1976. In the early 2000s, inspired by Borges, he takes up the pseudonym Tuono Pettinato and founds the alternative label “Donna Bavosa” together with Ratigher. This leads him to work with Maicol&Mirco, LRNZ and Dr. Pira, with whom he will later found the Super Amici collective. The works he realizes at that time – then gathered in the collection Apocalypso. Apocalypso. Tuono Pettinato: Gli anni dozzinali (Coniglio Editore, 2009) – are drawn "deliberately badly and in a hurry so as to save time for more exciting and fun things." Together with Super Amici, he founds the magazine "Hobby Comics" (GRRRzetic) and the free-press "Pic Nic", whose pages host the works of comics artists such as Paolo Bacilieri, Francesca Ghermandi and Adriano Carnevali. Since 2005 he makes children’s books for the publishing house Campanila. He published the autobiography Il magnifico lavativo (Topipittori, 2011) and achieved greater success with a series of biographies, always halfway between surreal humor and psychological insight: Garibaldi (Rizzoli Lizard, 2010), Enigma (about Alan Turing) and Nervermind (about Kurt Cobain). He collaborates with the magazines "Vice", "Rolling Stone", "ANIMAls", "GQ", "Link" and "XL Repubblica" (for which he designed the Ricattacchiotti series). His style is a combination of light sketched caricature and serious topics treated with irreverent sarcasm, as in Corpicino (GRRRzetic, 2013), which deals with the unhealthy relationship between media and crime report.
25 NOVEMBER ~ 10 DECEMBER
ADIACENZE

Tuono Pettinato always identified as a champion of courtesy and calmness. His ageless literary style has always conveyed a kind of sophisticated well-read lightness that makes the right hemisphere of the brain laugh pleasantly. But what is really going on in the depth of this author’s inner world? Well, there is another side to him, darker and pitch black, which can no longer be restrained. With L’Odiario (GRRRz 2016) Tuono surrenders to a strong, insolent, evil feeling: hatred. And he exhibits the strength of this emancipation: an appreciation of hate as outrage, rebellion, revolt against the imperative of political correctness, cultural vulgarity, and unjustified mushy feelings. The exhibition will be a participative staging of this form of hatred: writings, drawings, conceptual maps, a venting area, a forge of hate and many other activities designed to teach the visitors how to master a new form of conscious and rebellious hatred.