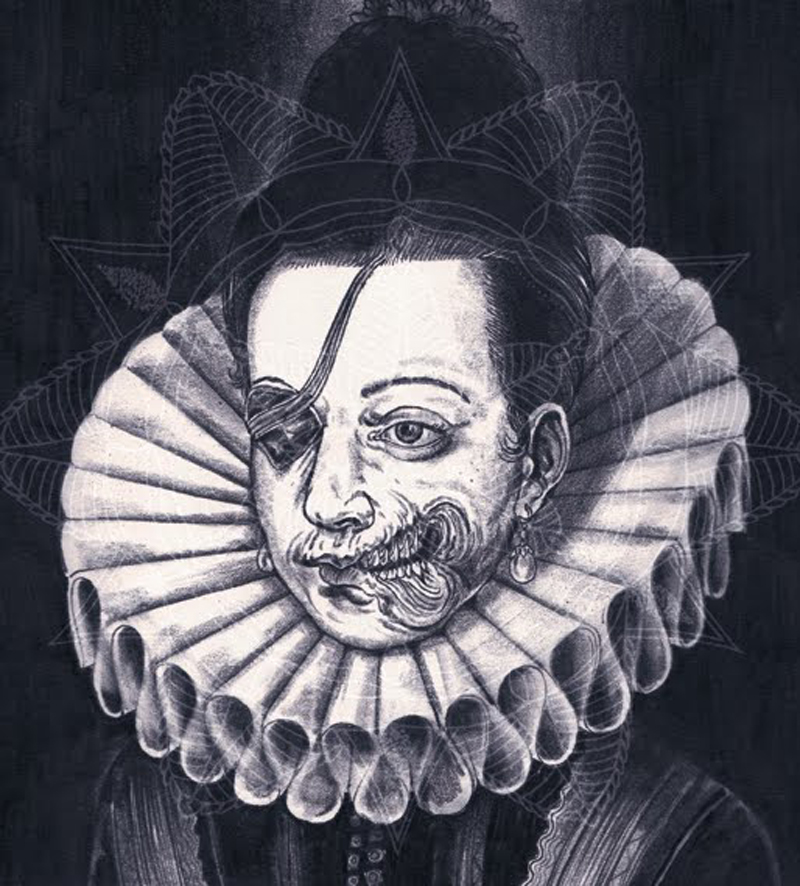 Daniel Muñoz "SAN"(Morale, Cáceres 1980) begins his path in the first years of the 90s, painting on the walls of his hometown. After a few years as a self-taught mainly wallpainting artist, in 1997 he decides to undertake an artistic degree in the city of Cácares, then in Madrid in 2000 to start his studies at the Fine Arts Faculty at the Complutense University. During the first years in the spanish capital, he has his first exhibits, alternating with mural works in many Spanish and European cities.
Since the beginning, his work has a strongly figurative mark, using exclusively the public space as a way to convey his work, making his messages clear to as many persons as possible, without any socio-cultural discrimination.

His style is composed by symbols and codes creating an accurate reading within the narration of classic painting and the sociologic theories of contemporary art. Every one of his works forces us into different and confused interpretation, even if they depict daily facts and anecdotes based on common topics.
In the last years he has realized various exhibits and interventions in public spaces in Europe, North America, South America, Asia, Russia and Middle East. In particular, he has had showcases in spaces such as: Luis Adelantado Gallery in Valencia, Ceart (Fuenlabrada), Le Gogna (Niort – France) and the National Gallery of Art of Amman (Jordan).

His work has been published in various books and artistic publications.
http://www.eseaene.com/

James Kalinda lives on the mountains of Reggio Emilia Apennines. He’s a tattooist.
He paints on canvases and walls with every technique. He paints with fuchsia and black. James Kalinda signs his drawings with a black balloon.
He puts the human beings in the center of his representations, while the desolation of the abandoned places like houses or warehouses is the typical landscape is creativity feeds on.
His work is strongly tied with nature and its deformations. The recurring themes of his work are life and death.
http:/jameskalindatattoo.tumblr.com/

Paper Resistance , an author moving between illustration, graphic, publishing and public spaces interventions, begins his production in 2001.
His clearly recognizable style is dominated by a predilection for the absence of flat fields of color, and also a clean lines, through which he’s capable of depicting, with weird and incisive associations based on the paradox, the contradictions on the contemporary, in a sneering socio-political critic often expressed through a dissemblance of meanings.
Paper Resistance has been one of the founders of the inguine.net collective and the magazine of the same name “inguine mah!hazine”. He currently is one of the animator of Original Cultures.
He’s part of ZOOO/Print&Press, a collective of illustrators dedicated to the production and printing of publications, that includes the most important names in street art and comics.

His works have been published on various magazines and fanzines, Italian and foreing. His illustrations have often been used for discographic productions, concerts poster and cultural manifestations. The title of his last collection of works is “Vertigo”. He has realized various intervention in public spaces. In 2011, in the occasion of BilBolBul, he realized “Io sono qui” (www.io-sono-qui.org) with Hamelin Associazione Culturale, a composite project about the juvenile detention center P.Siciliani in Bologna, featuring, within other things, an installation on the external walls of the institute. He lives in Bologna.
http:/www.paper-resistance.org/

Scarful (pseudonym of Alessandro Maida) was born in 1968 and he’s an roman artist and designer. He created the Hateful Graphic Vandals collective (1995) with other artists of the roman scene.
He’s a member of the WHY STYLE group, with the artists Joe, Nico, Pane and Stand. He has had exhibits in various galleries in Rome, in the Parco della Musica Auditorium and at the Naples MADRE. He has curated the artwork of bands such as Zu, Antiyou, Truceklan, Dimension X, Ius Primae Noctis, Ardecore and many others, and he continues his collaboration as an art director with many Italian communication agency. He has worked with Beans.T Japan, VNGRD, Carthartt, Nike Streetwear and SlamTrick.
The title of his last collection of works is“NO JOY” and it’s published by ZOOO/Print&Press. http://www.alessandromaida.com/

Il Museo delle Cere Anatomiche di Bologna [The Anatomic Wax Museum of Bologna] is a glimpse into the study of anatomy between the 18th and 19th centuries. It holds a collection of human anatomy, both normal and pathological, that is one of the most interesting and impressive in Italy. It is within this context that four artists, coming from a completely different background, that of the underground scene and street art, will work for one week : Paper Resistance, James Kalinda, Scarful and Daniel Muñoz.
The four artists will reflect on the idea of illness and how it is, in fact, part of our bodies. This project will culminate in a book, arranged to be printed during the festival, that will then also be on exposition, together with mirrors and instruments, inside the museum, with the wax models that will have served as their hosts.