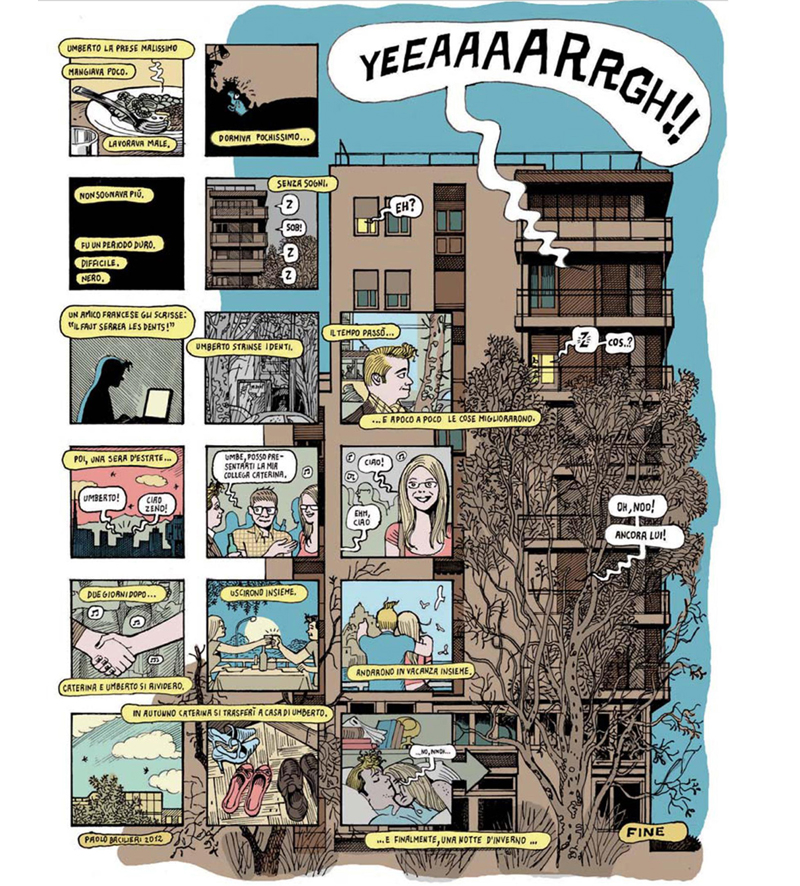 Paolo Bacilieri was born in Verona in 1965.
After his debut in 1986, at the age of 21, on the french magazine “A Suivre” with the story Il tesoro degli Imbala, he continued his career with the surreal eroticism of Una storia del cazzo and the noir atmospheres of Barokko (Black Velvet, 2004).
In 1994 he realizes Durasagra Venezia Uber Alles (Black Velvet, 2006), and causes a stir with the publication of the short story The Supermaso attitude (Phoenix, 1995) in the following year, based on the patricide Pietro Maso.
After that, he begins the serialization of the adventures of Zero Porno, collected by Kappa Edizioni in the two volumes Zeno Porno (2005) and La magnifica desolazione (2007).
Paolo Bacilieri is also one of the main artists for Napoleone and Jan Dix for Sergio Bonelli Editore.
In 2006 he realized the poster and the graphics for the exhibit “Fumetto International”, dedicated to the transformation of the contemporary comics, at the Triennale of Milano.
In 2008 he published with Kappa Edizioni Canzoni in A4, a collection of drawings in the form of a diary, inspired by his musical universe, and in 2010 Rizzoli Lizards reprinted a collection of the episodes from Napoleone drawn by Bacilieri.
In 2011 he pubblished Phonx with Black Velvet, and in 2012 Adios Muchacos with (Rizzoli Lizard) with the collaboration of Matz, and Sweet Salgari for Coconino Press/Fandango.
In the occasion of Lucca Comics&Games 2014, Coconino Press/Fandango will publish his last book Fun, about to the story of crossword puzzles.
For his works, published in France, Belgium, Spain, Germany, Denmark, Netherlands, Brasil and US, he received numerous awards, such as the Best Author Award at Lucca Comics 2006.
ATELIER Sì
12 hours lesson
19~20 november
Schedules h10-13 / h14-17

Paolo Bacilieri is one of the most original and innovative voices in italian comics, an author whose work stretches from research comics to serialized works, always expressing his own styke. For the laboratory in the occasion of BilBOlbul 2014, he will inspect methodologies and pratices of the comic short story, and through negative and positive examples, will accompany the participants in the creation of a self-contained short story.
The workshops are designed for aspiring illustrators, lovers of the art, those who work in the sectors of illustration, comics, design and publishing. The workshops will be held in Bologna and are open to a maximum of 20 participants.
Images © Manuele Fior for La Repubblica

TO REGISTER
Registration deadline postponed until November 14!
Send a request to: organizzazione@bilbolbul.net
Request will be taken until places are filled; once confirmation is sent the participant should send in the 60 euro deposit. Courses are open up to 20 people and will be held with a minimum of 12 participants.
Room, board and materials are the responsibility of the participant: those enrolled will recieve further information on what to bring to the course.